Growing up on Cape Cod meant that every restaurant in town had to serve their version of the creamy clammy chowder that we hold so near and dear to our hearts – even if all that creamy fatty goodness goes straight to our arteries. Traditionally, New England Clam Chowder means a heavy, fatty, creamy, sentimental, and delicious appetizer, served in a white bowl with a side of oyster crackers. And while slurping spoonful after spoonful of the creamy goodness, a thought crosses your mind: “I wish this wasn’t full of fatty calories!”

Well, the chowder genie has finally granted your wish. After a chowder-filled weekend in Newport, I created this recipe is for a creamy, fat-free, dairy-free, gluten-free, and optionally vegan version of this ol’ New England staple. Now we can enjoy all the flavors and creaminess of this old favorite, without the extra artery-clogging saturated fat, and without sacrificing texture or taste. After whipping this up, I realized how easy it would be to make some minor adjustments, and create a dairy-free, vegan, gluten-free version. You can adjust this recipe to grant all or some of your dietary wishes. But the basics don’t change and will give you a perfectly creamy – and healthy!* – version of the real deal.

Simmer the sausage in the broth until cooked through. Add the potatoes, celery, onions, carrots, old bay, celery salt, hot pepper, black pepper, and bay leaves. Simmer until potatoes and carrots are tender.

Add the shrimp/clams, and the blended “cream” mixture to your simmering chowder base. Stir and heat until just simmering, then turn off the heat. You don’t want it to boil, but you want the flour to cook out.  The chowder should take on a rich, creamy texture once the flour and arrowroot work their magic.

Let it cool for a few minutes and serve along side your homemade crackers.

* Because I’m claiming this is a “healthy” recipe, I wanted to see for myself just how “healthy” it is. Turns out – it’s pretty healthy!

Here is the nutritional breakdown for the recipe as written above, without any of the noted substitutions or omissions (yes, it includes the chouriçe!). This is per serving, based on 5 servings per recipe.

(Nutritional Data is from myfitnesspal.com) 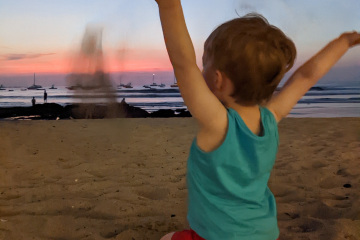